We are together… at home… in the zendo… on Zoom.  Who could have predicted this would describe our Zen Buddhist training when we began 2020? What creative and flexible beings we are!

With our practice place at home during the Coronavirus, we have an opportunity to practice intimately with our home altar. Maybe you have had an altar for a long time, or perhaps one is just coming together now. 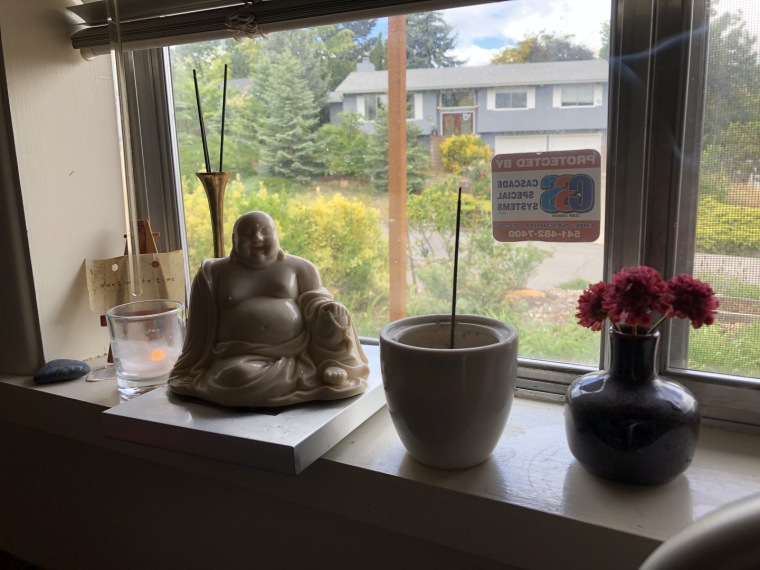 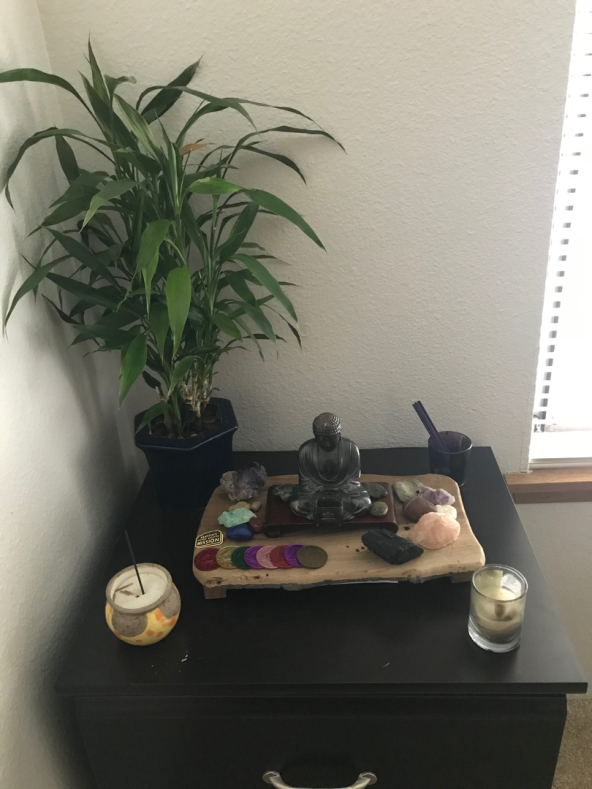 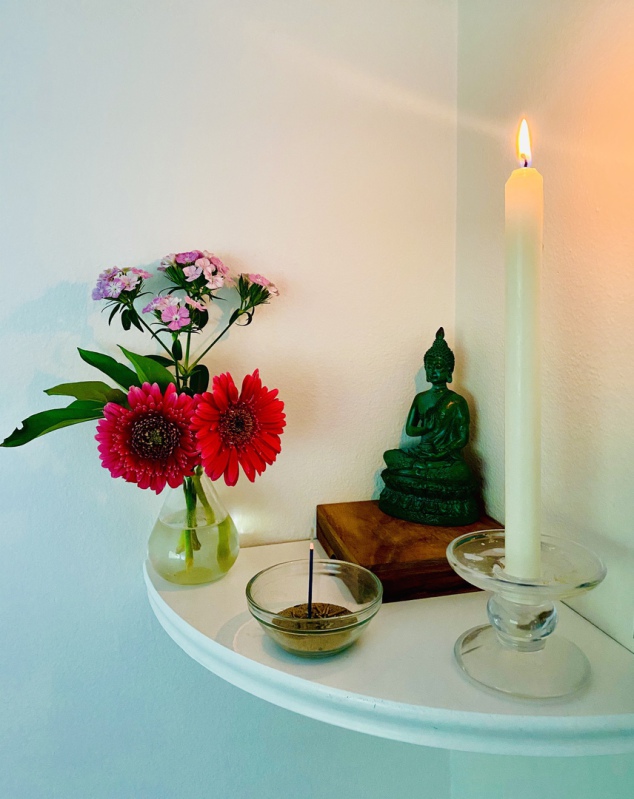 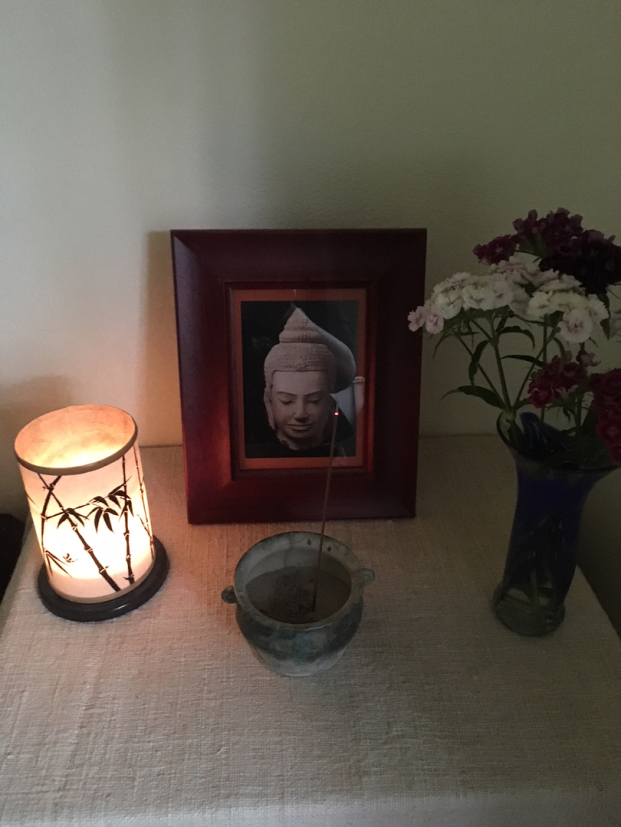 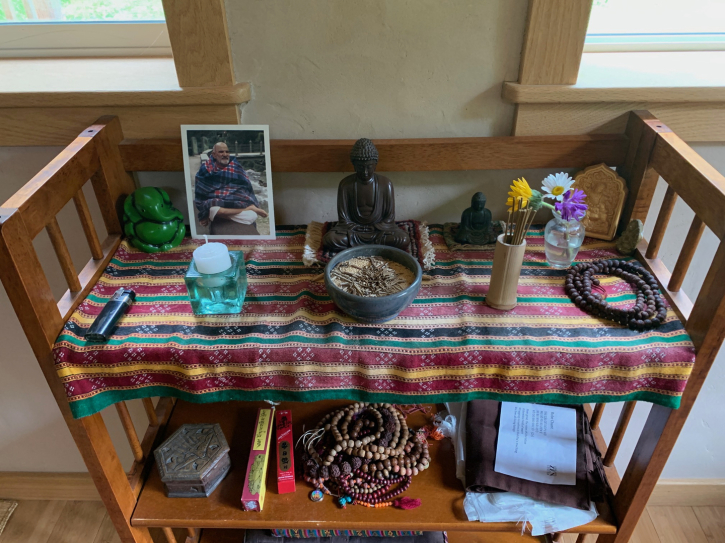 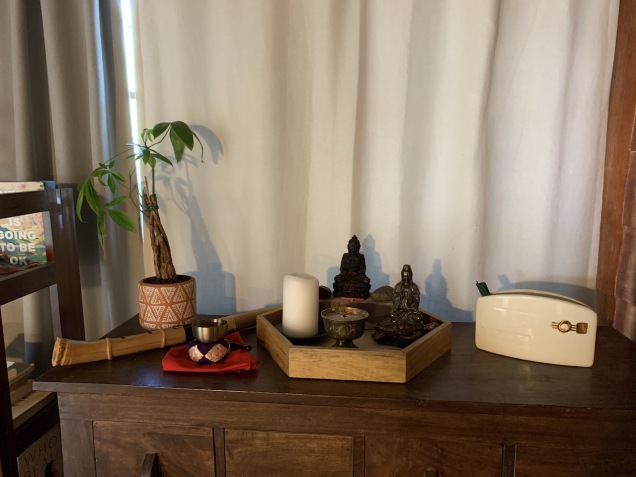 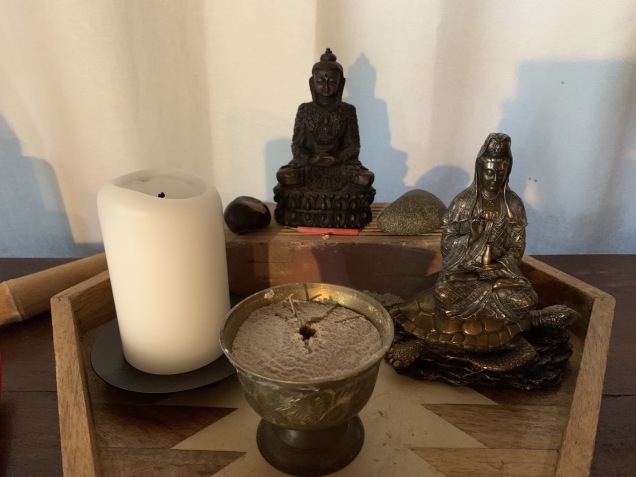 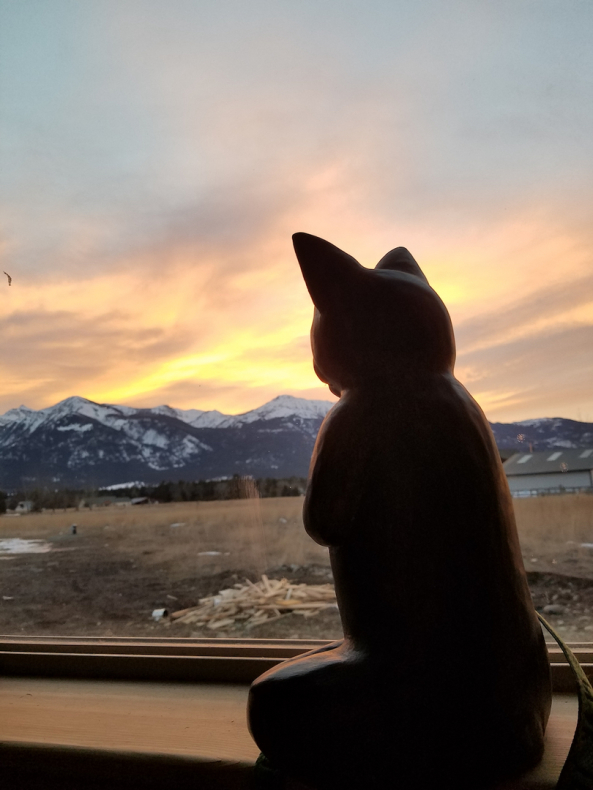 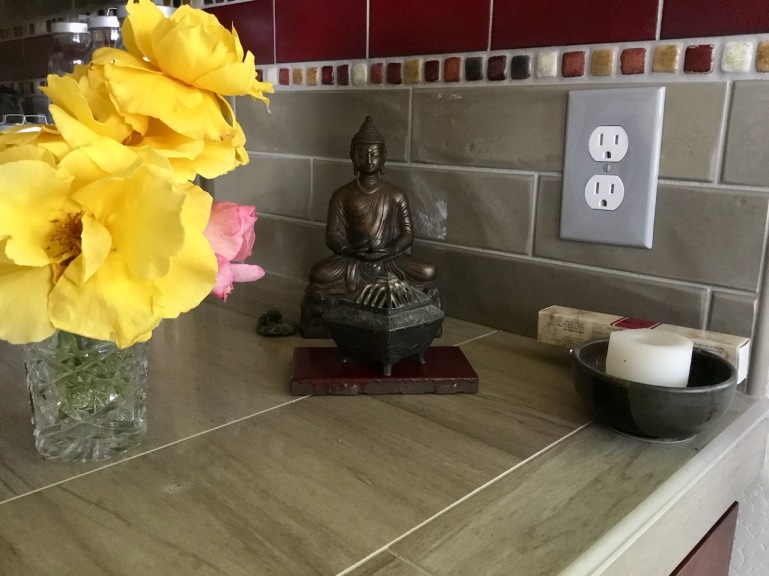 This altar evolved with the Pandemic time we are in. About 30 years ago a man passed through town selling Tankas.  I have not practiced Tibetan Buddhism but Greg took refuge with Gayatrul in Hilt monastery for a time.  This Buddha holding the empty bowl of wisdom was chosen then and has been hanging above our dresser for many years.

Also on the dresser is a white arctic wolf which was purchased on line after the retreat at Red’s Cabin in which a vivid dream of a white wolf walking near a field of white snow edged by a pine forest occurred.  I saw the tree at Bi Mart one day and brought it home to be with the wolf.

It has been thus for a long time. When AZC closed I began sitting with my husband so a little altar evolved with a zazen bell, a small sutra book, rakusu, incense, candle and small vase for flowers. One thing and then another entered the space, not all at once.

In cleaning out the stack of papers, I found an envelope with the Ofuda and a message from Buddha Eye Temple in Eugene.  I had never opened the envelope thinking it was a receipt for tax purposes.

It was a beautiful response:  “Great Prajna.”  So it is posted now with the tanka.

I really feel this altar is a protective focus in these times.  It is with deep gratitude that zazen practice occurs here. 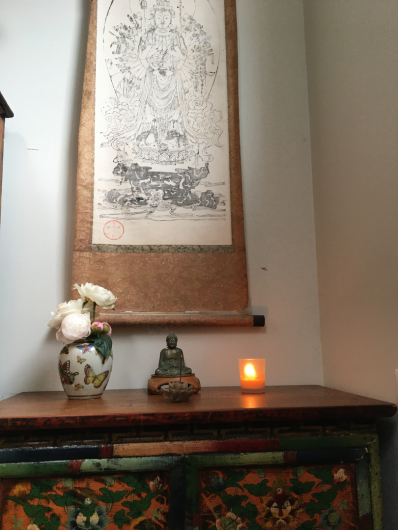 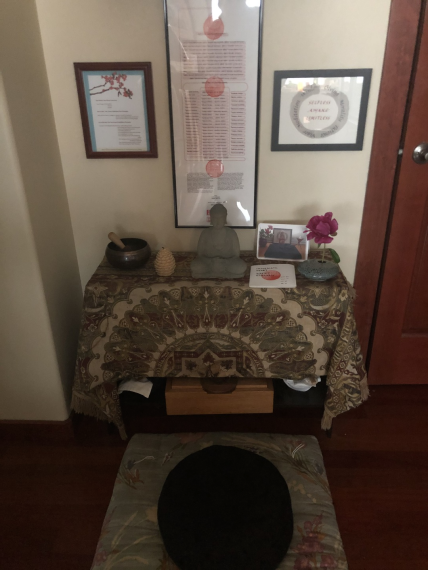 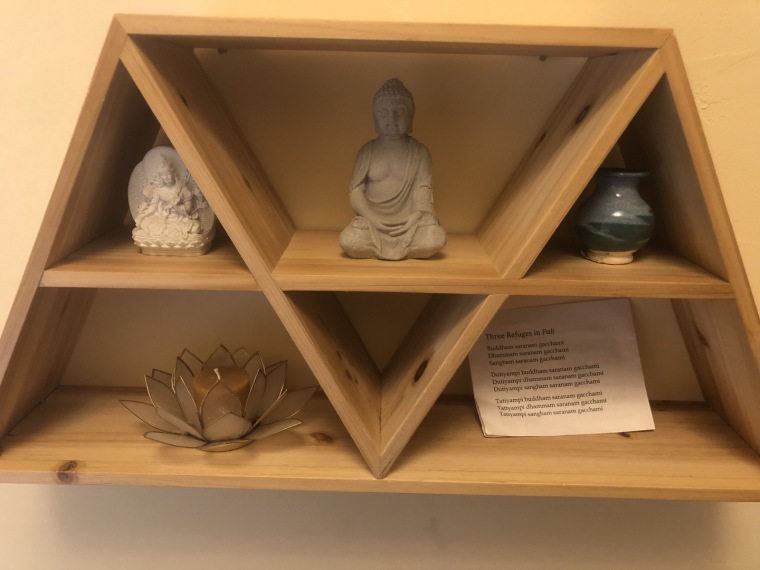 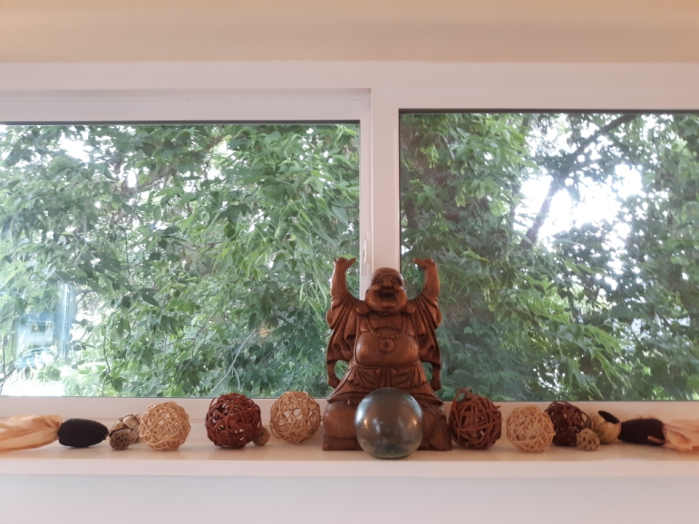 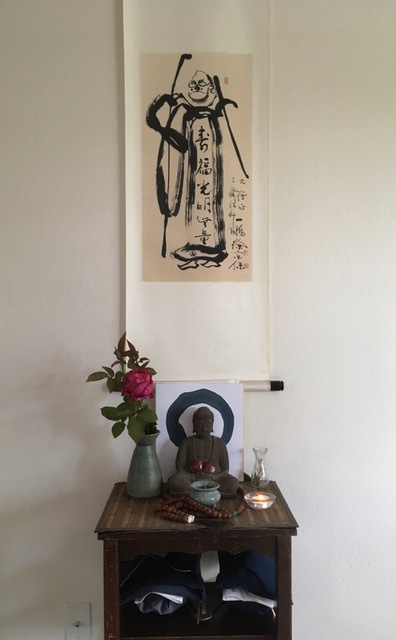 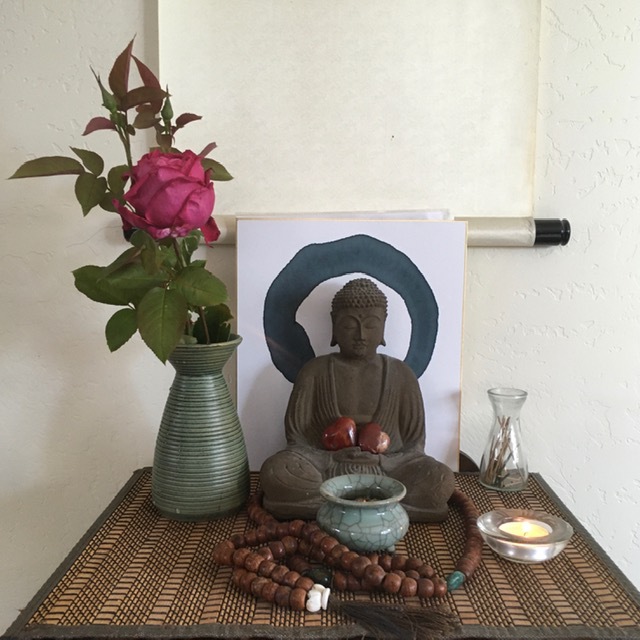 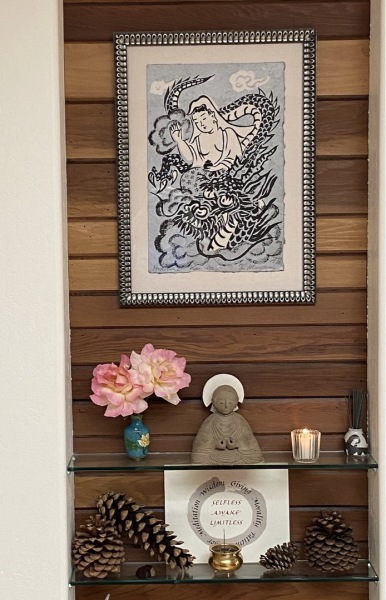